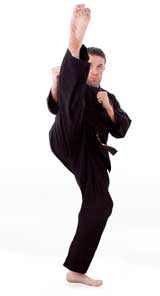 As an instructor Master Pat Forde is highly experienced with close links to the community. Students under his instruction have developed very strong skills & have been given the opportunity to excel. Master Forde has already instructed many students to black belt grade & these students still attend class today as a focus of Munster Martial Arts is to help further develop these students also. For those students that wish to compete we have an established competition team. Under Master Forde's instruction members of our competition team have achieved at both national and international competition winning many national medals and competing successfully internationally.

Not all of our students choose to compete but all students in our classes have greatly benefited from Master Forde's instruction methods. Academics is always stressed in class and many of our students have achieved impressive academic results in parallel with their martial arts development. Master Forde has featured on local & national media to discuss aspects of our classes , he has himself represented Ireland in International Competition & has had a student nomination for Bank of Ireland National Student Achievement Awards for achievement reached through his instruction.

Pat Forde is from Limerick city and attended St Brigids School & CBS Sexton Street where he completed his leaving certificate in 1994. It was while a student in CBS that Mr Forde started his martial arts training in late 1989/early 1990. After attending CBS Master Forde went on to study at the University of Limerick where he graduated in 1999.

Pat's family history had been in boxing , both his father and uncle had been well known local amateur boxers in their youth boxing in St Francis boxing club in Limerick where they won many fights and titles. When Pat wanted to take up a similar activity a friend of the family recommended a local club.

"Martial arts didn't come easy at first and I found the training tough and the techniques very difficult. I had never really done any sports before so this was all very new to me and I remember thinking it seemed to be coming much easier at first to the other students in the class. Over time this probably made me train even harder."

"I was lucky to have a great instructor and as I progressed through the grades I feel I got stronger and grew in confidence." 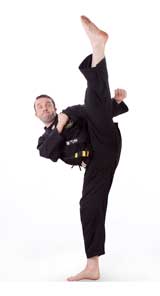 In 1995 Master Forde was graded for his black belt by Grandmaster Jae Joon Kim 10th Dan in Claughan GAA Club, Limerick. Up until his death Grand Master Kim had been one of the top authorities of Tang Soo Do in the world. Grand Master Kim had been instructor to former world champion and famous actor Chuck Norris. Master Forde was in the first group of students who achieved their Tang Soo Do Moo Do Kwan Black Belts in Ireland. He had just commenced studying in the University of Limerick when he received his black belt.

"I think my martial arts training did benefit my academic studies while attending UL . While in college I really enjoyed myself and I made many great friends that I'm sure I'll have for life but when it came down to studying I always knew what I had to do and was prepared to do it. The discipline in my training definitely help me mentally & I think when I learned to apply the same work ethic to my studies as I had to my training it greatly benefited my studies & academic results in UL" 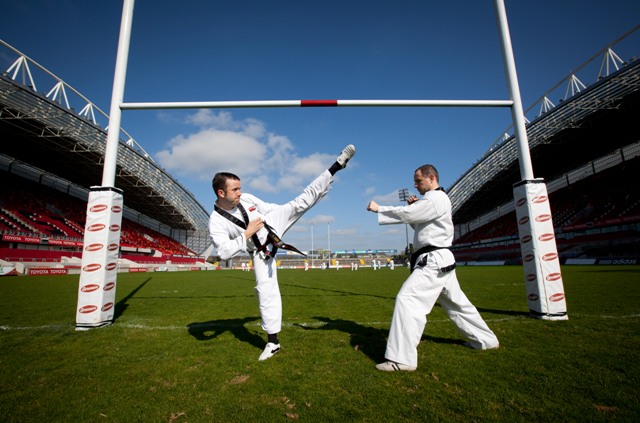 Master Forde graduated from the University of Limerick in 1999 with a 2nd Class Honours Degree.

Master Forde was over-due his 2nd Dan grading when he graduated from the University of Limerick but passed on the opportunity due to work commitments. He spent some time working in London and used this time to continue his martial arts training taking part in Kickboxing in Ilford in Essex.

At this point Master Forde had begun instructing students of his own. Some of Pat's first students had the opportunity to train with Grand Master Kim while on his visit to Ireland.

In competition our team was never the biggest team in attendance but our team spirit & results always stand out. Over the past number of years all members of our competition team would frequently win medals in their divisions and many of our team have won medals in every competition they have entered.

Master Forde's students have achieved in International Competition. Some of our students have now represented Ireland on more than one occasion.

Master Forde was Irish Team coach at the Tang Soo Do World Championships in Cardiff , Wales in May 2011 where all the team were students of his. Under Master Forde's instruction the team won a very impressive 11 medals including 3 Gold, 5 Silver & 3 Bronze medal.

Master Forde was Irish Team coach at the Cheezic Tang Soo Do World Championships in Poland in October 2009 where all the team were students of his. Under Master Forde's instruction the small team won 2 Gold, 1 Silver & 1 Bronze medal.

Munster Martial Arts represents an opportunity to further develop Tang Soo Do and martial arts in Ireland , it gives our students a unique opportunity to participate, develop and excel. It would not have been possible without the help and support of all my students, family, friends.

In addition to his martial arts expertise Master Forde is also passionate about the protection of kids from bullying. To this extent we have launched our Anti-Bully Bootcamp programme which has been very successful nationally. Anti-Bully Bootcamp helps kids turn possible bullying situations around by helping them build confidence, self-esteem & assertiveness with new body language, ways of speaking , and sense of self.

To facilitate Anti-Bully Bootcamp Master Forde wanted to greatly improve on the skills and anti bullying methods we used in our martial arts class to make the programme suitable for all kids. Our aim was to provide a programme that rather than just talked about the negative effects of bullying gave kids and parents a positive programme that would help families deal with and help prevent bullying situations. To achieve this it was vital to seek out training that deals with anti-bullying and after conducting research both in Ireland and abroad Master Forde has received training in the UK. All anti-bully bootcamps are delivered by our lead instructor Master Pat Forde. Master Pat Forde is fully Garda Vetted and has many years of experience working with young people.