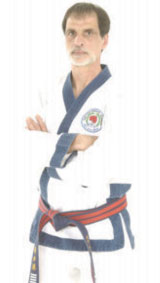 During the late 60's and early 70's Grandmaster Giacobbe was a well-known, top tournament competitor on the East Coast.

In 1977 he traveled to Korea in order to refine his art and undertake the study of the ancient techniques of mind power derived from internal Chi energy. The skills he developed through meditation and special breathing exercises have not only set him apart as a martial artist, but also landed him on numerous television programs such as That's Incredible, Evening Magazine, Good Morning America, CNN, Entertainment Tonight and Sally Jessie Raphael.

His trademark feat, performed for the Guinness Book of World Records consists of hanging two buckets of water onto sharpened motorcycle spokes inserted in his arms, while holding a suspended weight with his teeth, all the time standing on two knife blades can be seen below.

Grandmaster Giacobbe has been passionate about sports from a young age. He is nationally recognized as an expert in physical fitness, weight training, flexibility enhancement and exercise program development. In 1980, he began training members of the Philadelphia Eagles to improve their performance. In 1987, Coach Buddy Ryan assigned the entire Philadelphia Eagle defense to train with him off-season. He has personally trained NFL stars Reggie White and Mike Quick.

In boxing, he has been a special physical trainer in 15 World Championship bouts, working with Evander Holyfield, Pernell Whitaker and Sugar Ray Leonard. 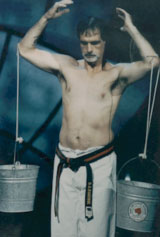 Grandmaster Giacobbe has appeared on the covers of six martial arts magazines including Black Belt Magazine and Karate & Kung Fu Illustrated. In 1985 he won a Gold Medal in Japan at the World Super People festival, amazing the Japanese judges by standing on authentic razor sharp Japanese Samurai swords without getting cut.

The Governor of New Jersey honored him for his Juvenile Offender Program, where troubled kids were put into martial arts training, and all them had positive results. In 1983 he was presented the Excalibur Award from the American Cancer Society for his donation of over $500,000.00 from the Fight for Cancer National Karate Championships, which he sponsors annually in Atlantic City.

In 2000, he was inducted into Black Belt Magazine Hall of Fame.

In 2008, he wrote a book called "The Secrets For a Powerful Life" (published by AuthorHouse).

Grandmaster Giacobbe is president of the Inter-Continental Tang Soo Do Organization through which he conducts seminars around the world on the traditional teachings of Tang Soo Do karate, philosophy, power meditation, Chi Breathing exercises and the Taoist meditation for healing.