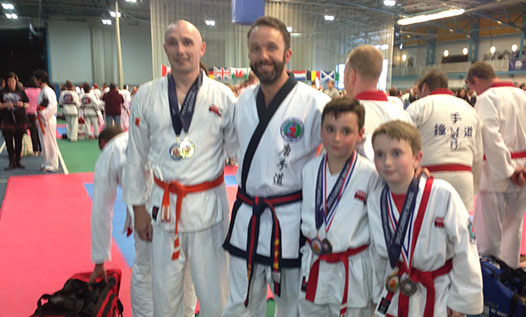 The local club teaches the Korean Art of Tang Soo Do in Limerick City, Bruff, Hospital and Newcastlewest and instructor Master Pat Forde is the Irish Chief Instructor for the Intercontinental Tang Soo Do Organisation which represents the Art in throughout the USA, Ireland, Wales, England, Holland, Greece, Italy, Belgium and Iran.  Grand Master Dominick Giacobbe who is president of the organisation  was in Limerick for the week and while in Limerick all the students of the club from around the city and county enjoyed the opportunity to attend classes instructed by the Grand Master.

The clubs week of achievements was kicked off by 3 teenage students of the club grading for 2nd Dan Black by Grand Master Giacobbe and Master Forde. The students Kevin McGrath, Evan Grant and Alan Leonard are all students of Master Forde since they were young kids and did remarkable well in all aspects of their tests to achieve their grades.

At the weekend students from all over the World travelled to Cardiff Wales for what was the largest International Championship in the World with over 1,080 competitors and thousands of spectators gathering for the 2015 Tang Soo Do Championship. The local club was represented by just 3 students travelling to Wales 11 year old Michael Gammell , 10  year old Colin Kelly and adult competitor Con Fitzgibbon making up the smallest team at the record breaking largest International Tang Soo Do Championships .  The local team however achieved an outstanding 100% success record with all 3 members bringing home medals. Con Fitzgibbon won Gold for the Forms division and Silver for sparring. Colin Kelly fought his way to winning a bronze medal for sparring while his team mate and close friend Michael Gammell left everybody highly impressed with his performance in the forms division and was a clear gold medal winner. 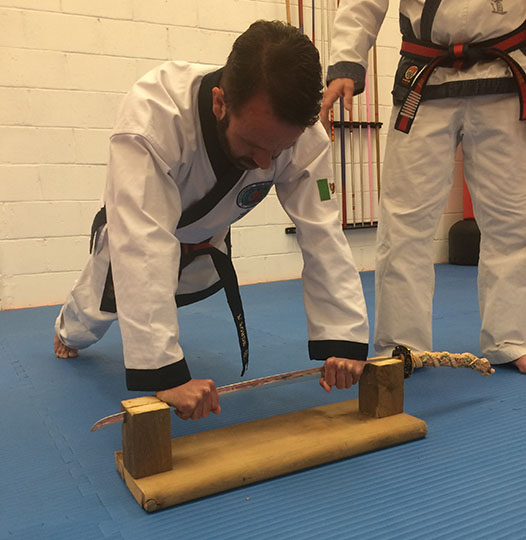 This was a fantastic result for the local team which is instructed by Master Pat Forde who was on hand to coach and mentor the students throughout the day.  Master Forde has now led his students  to an impressive 24 International Championship medals in recent years instructing and mentoring his students to reach the highest level of competition success at a number of international championships in 2009, 2011, 2014 & 2015 . This impressive level of success has led Master Forde to become regarded as one of the most highly respected instructors internationally which was  seen as the Tang Soo Do and wider martial arts community reacted to Master Fordes own achievements and feats.  For his knowledge , efforts , training and dedication to the art Master Forde was successfully tested and promoted  internationally  to the rank of 5th Degree Black Belt.

To test for this rank Master Forde completed a 3 part test under Grand Master Giacobbe. The first two parts of the test focused on Master Fordes knowledge of Tang Soo Do Forms and kicking , striking and kicking techniques , sparring and physical conditioning. These parts of the test were carried out in Ireland in in front of some of Master Fordes students. The final part of Master Fordes test has however garnered much attention nationally and internationally. In front of many of the top International Tang Soo Do Masters which were in attendance at a special seminar at  Bridgend Tang Soo Do Academy in Wales Master Forde completed  a physical feat of concentration and focus which involved him supporting his body weight on a razor sharp sword. Any slight move or lack of concentration can lead to injury but he successfully completed the task unharmed.

For information on classes for kids and adults Munster Martial Arts can be contacted on MunsterMartialArts.ie or via Facebook. Classes are suitable for all ages from 5 and older and for adults the great thing is that beginners are never too old to start and cater for all fitness levels.