Bullying is an epidemic in Irish society which effects people of all ages. In this series clincal psychologist David Coleman explored the issue of teenage bullying and offered his therapeutic support to a number of teenagers and their families who 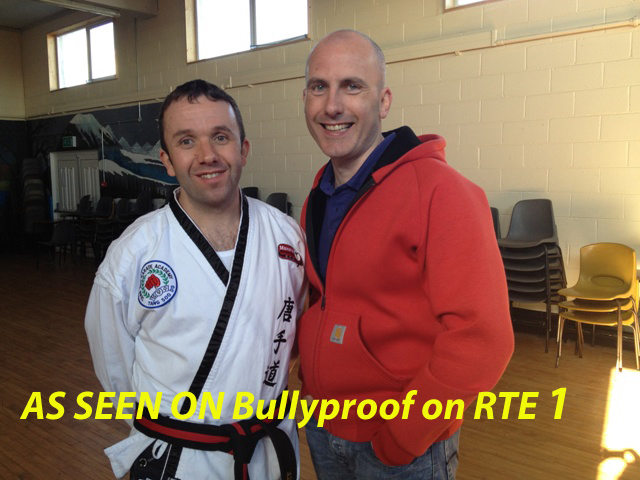 Bullying is an epidemic in Irish society which effects people of all ages. In this series clincal psychologist David Coleman explored the issue of teenage bullying and offered his therapeutic support to a number of teenagers and their families who have been effected by bullying. As part of this support one of the male teenagers effected by bullying was brought to Limerick to visit a Munster Martial Arts class and to meet Master Pat Forde.

Master Pat Forde's was asked to support the show as with his anti-bullying training in the UK and experience on the subject combined with his coaching/teaching talents he has helped many families, kids and teenagers deal with bullying by empowering those effected with the skills , knowledge , confidence , assertiveness and self-esteem to be able to deal with bullys and help move on in their lives.

Master Forde spent lots of time on the show working with David Coleman and one of the teenagers on the show Mark. On the TV show David Coleman referred to how beneficial martial arts is for children and the impact this might have regarding bullying. As part of the show one of our teenage black belts Luke Kennedy was also interviewed and many of our younger members made their TV debut! .

If you have any concerns regarding bullying and would like to contact Master Pat Forde please do not hesitate. Pat works nationally and regularly runs anti-bullying workshops for those effected or concerned about bullying. These can be arranged as group sessions but also privately with kids or teens and parents. Pat also works with many schools delivering anti-bullying training to students , staff and parents talks as in order for bullying to be effectively dealt with everyone involved with dealing with school children needs to be prepared with the correct information and skills. Pat has also worked with many other organisations delivering anti-bullying & life skill training such as at the National Dyspraxia Awareness Conference and through many other agencies dealing with young people.

Previous to working together on Bullyproof Pat had also been featured by Clincal Psychologist David Coleman on the Irish Independent newspaper in May 2011. To see the article click here.