October 2009 – Fantastic results for our Association competition team & team instructor Pat Forde as they have come home with 2 gold, 1 silver & 1 bronze medal. Congradulations to all members of the team who travelled to Pulawy, Poland in October to compete in the World Tang Soo Do Championships. 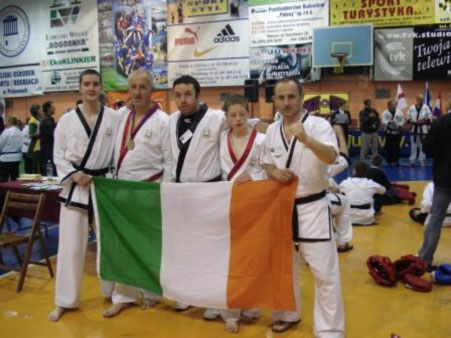 The team for this event were based in the Hospital Club under Mr Pat Forde. The team consisting of Pat Forde(Instructor), James Meaney, David Meaney, , Peter McLoughlin travelled to Pulawy in Poland to compete in the 2 day World Championships. The event was organised by Cheezic Tang Soo Do Poland and was attended by teams from many countries with hundreds of competitors taking part.

James Meaney from Bruff who has been a student of Pat Fordes in Hospital since the age of 5 currently attends 1st Year in Ard Scoil Mhuire Bruff became Limericks latest World Champion winning at the Tang Soo Do Open World Championships in Pulawy in Poland. In what was a fantastic display of ability and fighting spirit James became not only World Champion in one division but was crowned World Champion in two separate divisions and runner up in a third. This was James second attempt at World Championship success having competed in Holland in 2007.

In other competition divisions team mates Peter McLoughlin looked very impressive in his divisions. Competing in his first World Championships did really well & will be serious contender for titles at the next World Championships. Not to be out done by his son James, David Meaney capped an impressive medal haul for the team by winning a bronze medal in the senior division. Also at the competition as part of the opening ceremony Mr Pat Forde was presented with a special award for his support & participation in the World Championships by organisers Cheezic Tang Soo Do Poland.

Pictured above a proud moment for James Meaney & his Dad with their instructor Pat Forde. James has been a student of Pat's since he first opened in Hospital and James success in Poland is testiment to the efforts he puts into his training every day. Also pictured below is James & Pat with James dad Dave. Dave won 3rd place in his senior division. A good day for the family!